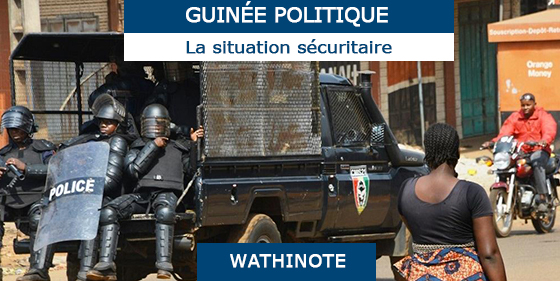 The illegal firearms trade in Guinea has many drivers. In part it is fuelled by the civil wars in neighbouring countries. Armed groups involved in those conflicts established rear bases and hid arms caches in the mountainous Guinée Forestière region in the south-east of the country. It is also fuelled by craft-produced weapons. Commonly referred to as ‘blacksmith’s guns’, these include shotguns and handguns designed to fire hunting cartridges. These firearms are produced locally or smuggled into the country from abroad (Small Arms Survey and AU, 2019, p. 55).

Arms traffickers also take advantage of Guinea’s 300 km coastline to smuggle arms through Guinea to other countries in the region (Sow, 2017; UN, 2017). Several two-way cross-border arms flows have been identified between Guinea and the Sahel region. It appears that this illegal trade is still active, especially between Guinea and Mali. Guinea is committed to reducing the illegal firearms trade. According to the Guinean authorities, the most prevalent types of illegal weapons in civilian hands are craft-produced firearms, hunting firearms, and automatic weapons. Contraband weapons enter Guinea mainly by land from neighbouring countries, and infrequently by sea.

In its 2018–2022 Action Plan the Guinean government defined additional priorities to combat the illegal proliferation and circulation of small arms and light weapons. These included: strengthening the capabilities of the National Commission to Combat the Proliferation and Illegal Circulation of Small Arms and Light Weapons (ComNat-ALPC); improving controls on small arms manufacturers; destroying all illegal, obsolete, or surplus weapons and ammunition; andsupporting micro-development projects and rolling out educational campaigns (Sow, 2017, p. 21) Legal framework Weapons possession in Guinea is governed by Law No. L/96/008 of 22 July 1996.

The law specifies that ‘the unauthorized purchase or possession of weapons and ammunition of categories 1, 2, 3, 4 and 5 is prohibited’ (Republic of Guinea, 1996, art. 9). In Article 20, however, the law states that ‘weapons and ammunition of categories 5, 6, 7 and 8 may be carried or transported freely’.11 There are no restrictions on the possession (by adults) of weapons in categories 6–8 (Republic of Guinea, 1996, art. 15).

The number of weapons in circulation How many firearms are in circulation in Guinea is unclear. The Small Arms Survey estimates that there are some 130,000 firearms in Guinea, although the government cannot provide an official count (Karp, 2018)

The Directorate General of Internal Intelligence (DGRI) is responsible for issuing licences for hunting rifles. These licences are valid for a year and can be renewed; only 35 such licences were issued in 2018.The DGRI also issues weapons licences to security employees, including embassy personnel or guards, mining companies, and (occasionally) protection personnel accompanying heads of state on official visits. It is unclear how many firearms licences are currently in circulation in Guinea.The DGRI is not the only institution with authority over firearms: the Ministry of Defence shares this prerogative and is responsible for the issuing of handgun licences. In addition, a préfet (a local government official) sometimes issues licences in the more remote regions of the country

The number of weapons in circulation How many firearms are in circulation in Guinea is unclear. The Small Arms Survey estimates that there are some 130,000 firearms in Guinea, although the government cannot provide an official count (Karp, 2018). As noted above, the bulk of firearms are likely related to hunting, which remains a traditional activity for many, especially in the more isolated areas of the country. Although wild game has become scarce in Guinea, it is thought that 10–30 per cent of families in rural areas own a firearm (Dia, 2005).16 The Guinean ComNat-ALPC is in the process of setting up a firearms register, which will likely clarify the situation.